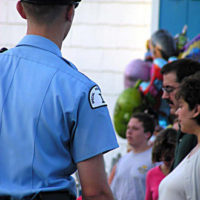 In State v. Okafor, a police officer driving to work in uniform was in a car accident. His patrol car had been having engine trouble, so he took it to a repair facility for patrol cars, and he was driving his own car at the time of the accident. His car was clipped, resulting in him losing control of the car and hitting a tree. He suffered personal injuries and pursued a workers’ compensation benefits claim.

The police officer’s employer, the State, brought an action for judicial review in the Circuit Court and filed a motion for summary judgment, which the court denied. The State argued that his claim was barred by the going and coming rule. Under this rule, you cannot recover workers’ compensation benefits for injuries sustained while going to or coming from work. There are certain exceptions however, including a special errand exception and an exception when an employer requires an employee to use his own car for work.

The police officer explained that when he dropped off the car for repair, there weren’t other patrol cars he could use, which was why he was driving his own car at the time of the accident. When driving his own car, he can arrest someone he sees committing a felony and help if he passes an accident. However, he can’t write tickets or chase vehicles or make a traffic stop.

The jury found he had suffered an accidental injury arising out of his employment. Once judgment was entered, the State filed a motion for judgment notwithstanding the verdict. The motion was denied. The State appealed, asking the appellate court whether the circuit court had erred in failing to rule as a matter of law that his accidental injury didn’t arise out of his employment.

The appellate court pointed out that the Court of Appeals had previously held that injuries suffered by an off-duty police officer driving a patrol car on a personal errand did arise out of and in the course of employment when the main reason for driving was to benefit the police department. The police officer argued that all the exceptions to the going and coming rule applied, and he maintained that, since he could have taken action to use his police powers during the drive to work, he was acting for the benefit of the police.

The appellate court explained that, since the injuries were suffered while he was driving to work, it had to start from the default position that his injuries weren’t compensable. However, the Commission found an exception, and the jury was entitled to give this weight. The court found that the free transportation exception applied. This applies when there is an express or implied agreement by the employer to furnish an employee with free transportation when driving to and from work. The police officer’s free transportation in this case was out of service. However, case law established that when an employer takes on the responsibility for providing an employee with free transportation to and from a job, the work day starts when the commute starts and ends when the commute ends. As a result the police officer was granted workers’ compensation benefits.

If you are injured at work, you should consult with an experienced Maryland workers’ compensation attorney as soon as possible to avoid losing your claim. Contact the attorneys at Steinhardt, Siskind and Lieberman at (866) 902-4111 or via our online form. We can help you investigate all possible avenues of relief.