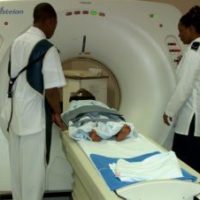 A recent federal case arose after a plaintiff brought a claim for social security disability benefits. He was injured in a car accident in 2004. At first he complained of neck and back pain, which seemed to improve with physical therapy. His pain worsened, however, when he went back to work. An MRI was taken of his lumbar spine and a disc protrusion was found at L3-4.

A radiologist found that a nerve root would contact the protruded disc and diagnosed the plaintiff with lumbar radiculopathy. The plaintiff’s thoracic spine MRI was found “unremarkable.” The doctor treated the plaintiff with injections. An orthopedic surgeon diagnosed him with degenerative disc disease, but did not find surgery appropriate.

The plaintiff continued to have pain. Another MRI was taken and a disc protrusion was found at C4-5 touching the right C5 nerve root. The plaintiff had severe pain radiating into his arm and had to visit the emergency room. The ER physician diagnosed cervical radiculopathy, but did not think he had lumbar radiculopathy.

A non-treating doctor offered the opinion that the plaintiff could lift 25 pounds and could sit six hours in a workday.

The plaintiff filed for social security disability benefits. An administrative law judge (ALJ) denied his applications. The court reversed this decision on the grounds that the ALJ had failed to explain the weight he had given opinions of different medical providers.

The ALJ conducted another hearing. The supplementary record included notes from the plaintiff’s primary treating physician. It documented the plaintiff’s complaints of pain and abnormal findings. The physician’s opinion was that he couldn’t lift 10 pounds and could only sit 10-15 minutes at a time. She diagnosed the plaintiff with degenerative disc disease and did not believe he could perform low stress work.

A physician was consulted who was board certified in occupational medicine. He determined that the plaintiff had a chronic degenerative spinal condition and could not be gainfully employed.

The hearing in front of the ALJ also included expert opinion testimony from a non-treating physician who had performed a records review. He testified that the records showed basically normal physical examinations. He could find no justification within the records for the plaintiff being barred from work and using a cane. The plaintiff testified, however, that he couldn’t walk or sit for four hours in an 8-hour workday.

The ALJ concluded the plaintiff was still able to do sedentary work and was not disabled. He gave limited weight to the primary physician and the consulting doctor.

The court noted that the records review doctor was no longer actively engaged in clinical practice and that there had been 29 appeals to district courts challenging his testimony.

The court found that the ALJ’s opinion did not following the Treating Physician Rule, which required it to give greater weight to a treating physician. The court reversed the ALJ’s decision.

If you have become seriously disabled and need to file either a disability claim with your insurer or the government, you should consult with an experienced Maryland Social Security disability attorney as soon as possible to avoid compromising your case or losing your rights. Contact the attorneys of Steinhardt, Siskind and Lieberman at (866) 902-4111 or via our online form.

By Steinhardt, Siskind and Lieberman, LLC | Posted on April 7, 2014